I posted this on a formidable midi group, but received just crickets.
Maybe the Linux Audio community knows the answer, so here it is again.

The reason i need this is to custom control a lot of hardware without a computer. Computers are just trouble live and I need to get rid of it. The Pad controller must therefore be able to be configured that if I press a pad, preconfigured midi string is sent out which then will change a patch on a specific midi device or do other tasks.

It must exist, but I just cannot find such a pad controller on the market.
Basically a modern version pad controller of this Link https://www.ebay.com/itm/MIDI-Patch-Cha ... 7675.l2557 , but it must look like a modern pad controller like e.g. Akai APC Mini or a Novation pad as an example.


Anyone who knows of a modern pad controller with 5pdin capability and which is programmable, let me know.

Maybe one of these products can do what you want? http://www.midisolutions.com/products.htm

A DIY route is using a Teensy (https://www.pjrc.com/teensy/) for which there are a lot of MIDI examples.
Top

thank you all for the kind suggestions.

I have the AKAI fire but could not figure out how to program a pad to send a custom command when pressed.
The problem is that the commands are multiple midi messages, e.g. changing a patch on an XS8 Synth.
This requires (MSB LSB Value) to be sent in succession.
Thus 3 Midi commands.

Unless someone knows explicitly of a pad controller that can configure pads for at least 3 midi messages to be sent when pressed let me know.

The only option thus far seems to be is to program an embedded controller (like the teensy) to do a lookup conversion.
That WILL work and is probably what I will end up doing, but I am baffled that such programmable pad controllers does not seem to exist.

It should be trivially easy. Here is what I captured from the IPFire pressing a few pad buttons. 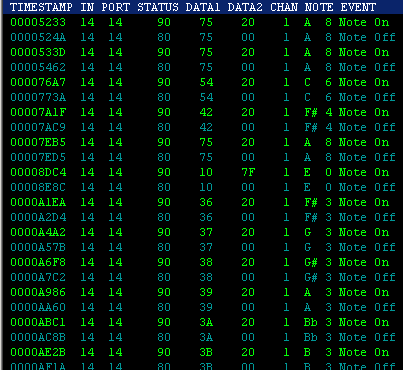 So unless someone has direct evidence that a pad controller exists that controller number, MSB LSB VALUE can be configured per button pressed i will have to go this way. It would be preferable however to rather have a controller that is programmable per pad or other functional object on the surface.
Top
Post Reply
5 posts • Page 1 of 1