MusE3: A handful of newbie frustrations

MusE is a MIDI/Audio sequencer with recording and editing capabilities, aiming to be a complete multitrack virtual studio for Linux. https://muse-sequencer.org/

MusE3: A handful of newbie frustrations

I'm building MusE3 from source, Ubuntu 17.10. Just did a "git update" followed by a "compile_muse.sh", cd into "build" and to a "sudo makqe install". I'm running as a regular user and ignoring the time precision warning (I'm never going to record in real-time, so this doesn't bother me).

I'm sure there's some basic conceptual issues I'm trying to absorb here, and when I get those I will happily write documentation, but I'm still struggling. I'm hoping that writing some of my assumptions down will help me clarify what's happening. So, my experiences so far:

What I can do:

I start qjackctl, then start muse3, then under qjackctl's "Connect" tool, I attach the Muse outputs to the System. This creates a line from Muse's "Out 1-0" to "Playback 1" and a line from "Out 1-1" to "Playback 2"

Muse has an empty track of some sort in it. I do not know how to delete that track. If I go to "MusE Settings" -> "Midi Ports / Soft Synth", I can add a synthesizer. If I add a MIDI track (using right click on the area under "IRMS"), and then an Audio Output track, I can select the pencil tool, draw out an area, select the arrow tool, double click on that area, and get the piano roll tool, and enter notes, and hear the notes.

I can't figure out how to delete or reorder tracks (which would let me fix this situation, cause I could move the output track to the bottom).

If I go "File"->"New", I'm given some template files to open. If I open one of them, I get a weirdly reduced MDI window that doesn't resize to the size of the master window. This seems like a bug, if I can help track it I will.

I can't figure out how to get MIDI input. I see my Korg nanoKey in qjackctl, I can attach it to the MusE Port 0, click on the little Midi input icon on the piano roll tool, click on the record button (and various combinations of the play button and whatnot) but nothing's inputting.

What am I missing? I know there's something simple for the delete and reorder tracks thing, like I'm not clicking in the right area, or don't understand some element...

The manual is under the Help menu in pdf form. An html version is also installed.
Both version are also available directly in the git repo.

Audio output tracks These provide the path for your project’s audio data to outside. Set up the
physical audio outputs you want to connect your audio out track with, and then route various other
tracks, such as wave tracks, to the output tracks.

Section 2.4
Routes
Routes are how tracks are connected together and to the outside world. (They are also how Jack midi
ports connect to the outside world. See midi port configuration 2.8.1). Each track strip has two buttons
whose icons look like plugs.
[ EDIT: In MusE-3 they are green or blue 45 degree arrows. Pay attention to helpful popup tooltips, we use 'em a lot. When these icons are
blue it means nothing is connected and you should click them and connect something. MusE ONLY auto-connects the first available
Audio Output Track to Jack ports. Any FURTHER Audio Output Tracks are up to you to route where you want. ]
One button is for input routing and the other is for output routing.
Clicking on these buttons will pop up a menu of available input or output routes that you can connect to.
Most audio tracks list other tracks to connect to, but audio input and output tracks are special: Audio input
track input routing menus list available Jack audio input ports. Conversely audio output track output
routing menus list available Jack audio output ports.
Meanwhile MIDI and drum tracks allow you to route available MIDI ports
and channels to the track using a handy popup matrix.
===============================

Deleting a track is easy. Simply hit the delete key while a track is selected.
Or right-click the track's name in the 'Name' column -> Delete Track.
Or Menu -> Edit -> Delete Selected Tracks.

Moving a track is done by grabbing the track's name in the 'Name' column and dragging it up or down in the list and dropping it elsewhere.

Not sure the template problem. Post a pic?
HTH.
Top

Aha! Thanks for the pointer to the manual, I'll drop that on my tablet for some light reading. I kept trying to find docs online.

This morning, I recreated some of the weirdness, but did manage to get the child window to maximize properly. Yesterday that wasn't happening, the child window looked like it maximized, but was still kept within the frame of the scroll bars that you can see here. Also some inconsistency about whether the area outside the scroll bars paints or not. So clearly I'm clicking some other window controls than I was clicking last night. 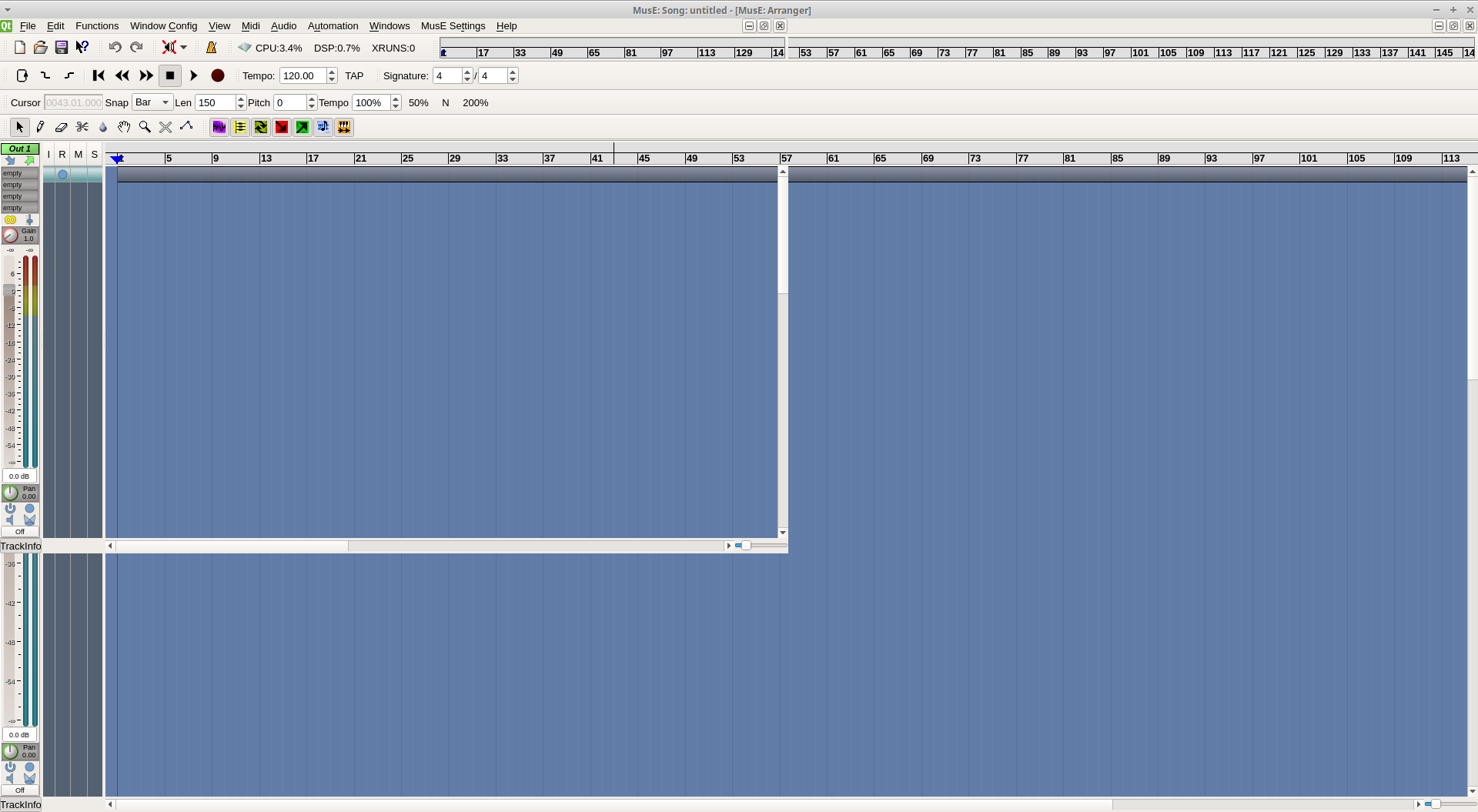 There are some hard to track down (atleast I think they are) issues with window handling, I see similar things as that screenshot sometimes, by resizing the window with maximize it goes away for me.

As for workflow in MusE, do take a look at some of the videos showing how to do basic stuff.
http://muse-sequencer.org/index.php/Tutorials
Top

Thanks for the pic. Wow, that's pretty severe, no wonder you were having problems.
I've not seen this particular bug. Currently I'm on OpenSUSE tumbleweed..

Until early 2017, there were a couple of severe MDI bugs in the KDE Oxygen and Breeze themes
which caused MusE to freeze the Arranger window. But not freeze like this, I think.

Hm, I wonder...
From the way you were talking about the Arranger's Track List ("...the IRMS columns...", "...some kind of track showing...")
I couldn't help think that maybe YOUR Arranger is frozen too and you are having trouble operating it.
There is a movable splitter to the right of those columns. Can you grab it and move it around? It should reveal more columns.
No? Splitter won't budge? That would be the KDE MDI bug, as above.
Top

So it isn't actually frozen, I can still manipulate the interior window (when I can find it), it's just that everything is limited to that smaller scroll region.

QT libraries are 5.9 (part of me trying to make MusE work for me is that I've got another project in Qt, so if I'm gonna hack on something, the same widget set is useful).
Top

Sorry for the delay.

danlyke wrote:So it isn't actually frozen, I can still manipulate the interior window (when I can find it), it's just that everything is limited to that smaller scroll region.

It seems I _can_ recreate this issue under kubuntu 17.10 if I select New and click on one of the templates. It's just that I pretty much never select [New] as by default MusE starts with a new project..
Did you try resizing the main window? As I wrote, for me this problem goes away if you resize the main window with the Maximise button.
There is probably some refresh call when you select [New] that is missing. Too much to do right now, please create a bug for it, trying to fix it is of course much appreciated also.
Top

spamatica wrote: too much to do right now.

Well apparently not too much to do...
Had a look and while poking around I updated to the latest git and seems I can't reproduce the problem anymore, Tim did you already find the reason?

Danlyke, could you try the latest git?
Top

No, I didn't specifically change anything.
I have KUbuntu 17.10 at work, and I did not notice anything unusual there running MusE - that was several months ago.
Top

I just wanted to note for reference that I experienced this problem many times, too.
I don't use KDE but Mint 19.3 with Cinnamon (always current master).

For my configuration I solved it by the GUI tweak "Open MDI subwindows maximized", which I've implemented recently.
Top

FWIW I run on Debian 10 with xfce4 and I don't have any issues.
MusE DAW running on Debian 10 Stable/XFCE4.
https://oscillator.se/musik
Top

If anyone here can reasonably reproduce this bug, I need your help.
Let's try to nail this down a bit more, shall we?

1: I note that the example picture shown above is using the Fusion theme. (Telltale icons.)
In my MDI troubles that I mentioned, I saw no trouble with that theme. Only Oxygen and Breeze.
However, please try other themes in the MusE Appearance dialog and try to confirm if it only happens with certain themes.

2: To me it looks like a theme problem, again. Think about it: We're not doing anything outrageous except
creating MDI subwindows and populating them. The fact that MusE doesn't crash and isn't completely frozen or locked out
is a strong argument it's not our fault. It would likely a theme MDI subwindows issue.

3: When it became clear that the frozen MDI subwindow troubles that I saw were caused by Oxygen/Breeze, I hesitated to
file a report because it would have been like me: "Install MusE, do this, do that, to reproduce", maintainer: "Uh, sorry, man".
Fortunately I discovered that I could reproduce the bug in Qt Designer. Yay. That got the ball rolling with an easily reproduced bug.
Please try to reproduce this bug in Qt Designer.
Try everything you can think of: Create MDI subwindows. Populate the subwindows. Create two subwindows. Create one while
the other is maximized. Try maximizing and restoring them. And make sure to try different themes when viewing your creations,
especially the relevant theme here - Fusion. Etc. etc.
[ Edit ] Follow my specific directions at the top of my bug report, and throughout, at the link below.

4: For reference, here is the bug report and fix: https://bugs.kde.org/show_bug.cgi?id=379790
Take note of the dates: The fix went upstream within days, but maybe the distros involved here were slow to update? LTS distros?
Notice my very last comment where I said it wasn't 100% but was fine for now.
Themes and MDI as well do have bug reports and problems are out there still...

[ Edit ] One last thing you can try is a setting in our Settings dialog, currently sitting in the 'GUI Tweaks' tab.
It's a checkbox called "Bug fix: Fix frozen MDI windows". It helped with the frozen Oxygen/Breeze bug.
It might help here.
That bug took me months to figure out and report. It killed MusE fr a while!