snell wrote:Hello,
I recently purchased an AudioBox 22VSL and I cannot get Ardour to record from the AudioBox instead of my laptop's internal microphone. Can someone that has gotten this interface to work offer any suggestions? I do see the interface in Jack but I am not sure if I have the settings correct.

If Ardour is recording from the internal mic, this means that jack is running on the internal audio interface.
Open qjackctl or Cadence and select the AudioBox from the list before starting jack.


I apologize if I should create a new post for this, I am not sure how...

You should have gone to the "Computer Related Hardware" subforum, and hit the "New Topic" button on top.
Actually, your problem is probably NOT hardware related, but a mere configuration issue.
Please, avoid some common spelling errors:
http://theoatmeal.com/comics/misspelling
Top

- I have never connected my AudioBox 1818VSL to a Mac or windows computer, I took it out of the box and connected it straight to my UbuntuStudio 13.10 computer and it worked out of the box

- I have recorded 7 inputs at the same time (Analog inputs 1 - 7) with Ardour 3.4 with no problems. I haven't yet tested with more inputs since I don't have more mics

This test was done on a dual pentium 1.8 GHz laptop (SSD - disk) with 44.1 kHz, 16 bit audio. The computer wasn't working too hard, I can imagine being able to record maybe 14 - 16 tracks with this computer simultaneously.

- USB 3 driver that ships with UbuntuStudio 14.04 is flawed. If you have USB 3 ports in your computer then disable USB 3 functionality from bios or you will get all kinds of problems like clicks and pops in audio, external USB 3 hard disks disconnecting themselves unexpectedly and uncleanly and so on. USB 3 ports work fine in UbuntuStudio 14.04 if you force them to work in USB 2 - mode.

Problem: No audio from AudioBox

If you don't get audio out from some AudioBox output, then Alsa might have muted the output. The solution is to fire up a Alsamixer in UbuntuStudio and unmute the output.


- Start up a mixer from: Menu / Audio Production / Mixers And Card Control / AudioMixer. Then select AudioBox 1818VSL as the audio card and click on "Set Controls", here you select which switches you can manipulate, select all. Now go to the "Switches" - tab, these are On - swithces and you need to tick all for audio to pass through all outputs. AudioMixer gives you 4 switches that each affect more than one switch in AudioBox hardware. QasMixer can give you more granular control over switches (see below).

- If you want to use QasMixer then start it up and press the F6 key to show sound card selection box. Now click on "hw:card" on the top right of the window and then select "AudioBox 1818VSL" underneath it. Now you can see Mute / On swithces on the bottom of the window. This is a bit strange, but you get more switches in QasMixer if you do the following when QasMixer is running:

Open up terminal and open the alsamixer (this assumes AudioBox is sound card number 2. Numbering starts from 0):

Use arrow keys to scroll to the right on top of "AudioBox Front" mute button and press the m - key twice to mute and unmute the input.

Now the box in QasMixer that shows the switches becomes too small to show all the swithces that appear. Maximize the window and resize the box by dragging up from the upper part of the box. Now you can see all AudioBox switches, click on each to find the one that stops audio output.

I once accidentally managed to power off AudioBox while Jack and Ardour was using it. After this I could not get any sound out of AudioBox, even reboot / poweroff did not help. Luckily I had my Alesis IO4 with me, and I was able to continue recording with it. A couple days later I was able to test the Audiobox again and it still did not work with this computer, there was no sound. So I tested it with another UbuntuStudio computer and it worked fine, the problem was in the software configuration of the other computer. The problem turned out to be caused by Alsa setting mutes on the AudioBox outputs and the procedure described above solved the problem.
Top

snell wrote:I recently purchased an AudioBox 22VSL and I cannot get Ardour to record from the AudioBox instead of my laptop's internal microphone.

You didn't set up JACK properly. Choose your AudioBox as input for JACK.
Being creative does not imply being lazy, stupid, or illiterate.

Thanks all of the information that you guys have provided on the 1818VSL. I was wondering about how the devices shows up on USB. Does it show up as a single USB device or two separate ones? Meaning, is there one for the inputs / outputs and a second for the internal DSP mixing?

I'm really hoping that it is actually two devices. That way, I can do all of my recording in Linux via Ardour, but run a Windows VM with the mixer attached for routing live audio for monitoring.

I'm not sure how it would look like, if the device shows up as two separate devices. My Alesis IO4 interface also has two entries in QJackCtl, but I think the system still sees it as one single device.

Presonus 1818VSL shows up in QJackCtl as (I attached a picture also):

lsusb prints over 1200 lines of text for Presonus, I don't know how to parse that information. I attached the output to this message. 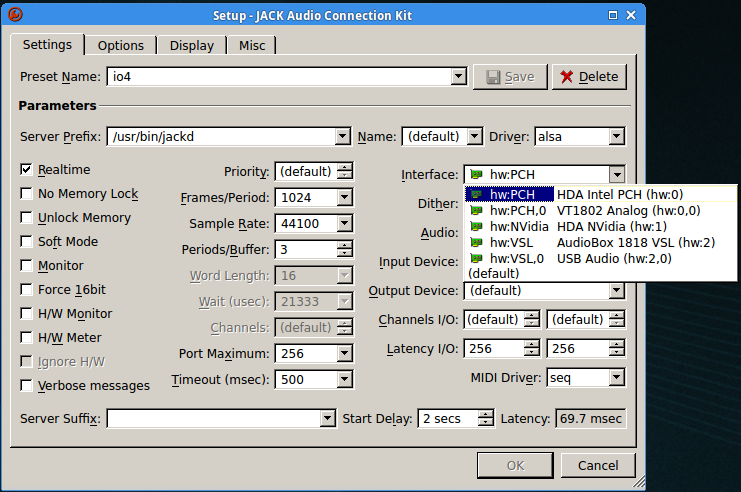 I have an audiobox, no idea which version it is, it does not seem to say anywhere, it is the smallest version brought about three years ago; also I cannot get it to connect at all, see the threads on audacity forum and mint forums:
http://forum.audacityteam.org/viewtopic ... 48&t=85850
http://forums.linuxmint.com/viewtopic.php?f=49&t=198248
Top

Thanks to mhartzel for the comprehensive info! I got an 1818vsl a few months ago, an open box/new for $175. I am using KXStudio, starting Jack with Cadence. The main intended use is Ardour4.

It shows up fine in Jack, I believe shows as one device. After I had barely gotten it going, I recorded 8 tracks during a band rehearsal, it did great. I am dabbling around with overdubbing now, it looks like I can get the latency down to 5-ish ms so it should be fine. I'm running port 7/8 (the default headphone jack) to a headphone amp for performers.

I don't yet need S/PDIF or ADAT ports so it's only 8 analog in/out for now. It's running on an old Lenovo T410i laptop with 8 gig of ram.
Rusty old Bitcoins lying around? Dispose of them safely here:14hjbheQVki8eG75otRK4d2MQBarCCWQfJ
Top

I noticed a problem when trying to playback a previous Ardour session (drum loop only) Playback had slight static and "dropouts" about every two measures.

I then closed Ardour and tried playback on another source.

I opened a browser and went to youtube and tried to play a video.

When I set the playback back to internal source, works like a charm. select pulse audio back to "on and off"

I'm hoping I just have the settings wrong.

"- Start up a mixer from: Menu / Audio Production / Mixers And Card Control / AudioMixer. Then select AudioBox 1818VSL as the audio card and click on "Set Controls", here you select which switches you can manipulate, select all. Now go to the "Switches" - tab, these are On - swithces and you need to tick all for audio to pass through all outputs. AudioMixer gives you 4 switches that each affect more than one switch in AudioBox hardware. QasMixer can give you more granular control over switches (see below)."


Can someone help me, I dont have playback sound on my VSL, but when I go in alsa mixer, I dont have a Switches tab but instead I see Playback, Capture and Option. In playback There is some faders that cant move and are stuck at minimum. Option tab show a clock selector but selecting either of the option doesn't do much.
Top

Hello everyone, I was finally able to find an Audiobox 1818VSL today !
But couldn't get it to work properly yet...
I'm sure I'm missing something obvious, but what ?

I'm using KXStudio (kernel 3.13.0 lowlatency)
I plugged it and configured JACK. First I've set it to 96000Hz/128samples but I got an awful lot of xruns immediately. And I had to return to the same setting I used for my onboard interface (48000/1024) and still getting a few xruns...
I tried to record and listen to some sound anyway : played sounds and recorded sounds are full of clicks and distortion ! (I checked the recorded sounds on another computer to make sure, they are definitely bad)
After hours of investigation and experimentation, I'm still stuck with my brand new interface I can't use.
I've read several times here that it works out of the box, from other KXStudio users too... what am i missing here ????

I've got a clue, but I don't know how to deal with it : as soon as I start JACK (using the audiobox), the root process called "irq/40-xhci_hcd" starts using a lot of CPU... whether I plug the audiobox to a usb2 or usb3 port doesn't change that. I checked /proc/interrupts dor IRQ conflicts, but couldn't find any. I have set my IRQ priority to favor USB, too.

thanks for your help, it will be really appreciated !!!

PS: i borrowed a laptop with a windows XP, and the audiobox works fine...
PPS: should I create a new thread for this ?
--- Copeau ---
KXStudio
Mix using Technics MKII with A&H xone23 and soundcraft EPM8
Recordings with (mainly) AKG P120, SM58 and EPM8
Top

Today's investigation : on the same laptop (dualboot), with a plain Mint and using pulseaudio. It took me a while to get pa to recognize the Audiobox, but then I could get some sound.
Well, it is much better, but still with some annoying clicks. And this time there is no xhci_hcd in the output of the top command.


EDIT:
and, I forgot : there is no way in the BIOS to disable the onboard sound, nor the xhci/usb3 stuff...
--- Copeau ---
KXStudio
Mix using Technics MKII with A&H xone23 and soundcraft EPM8
Recordings with (mainly) AKG P120, SM58 and EPM8
Top

Conclusion: not able to remove xhci (usb3) module without recompiling the kernel, I'm sending the Audiobox back...

This may be useful to someone else, one day :
I am not 100% sure, since I could not get it to work, but there is definitely a problem with xhci_hcd. I heard it could have been solved by plugging the Audiobox to a usb2 port, but my only usb2 port seems to be actually hosted by a usb3 hub... So in my case it didn't solve anything.
Anyone willing to buy this wonderful interface might want to double check that he is not in the same situation

Copeau wrote: I've got a clue, but I don't know how to deal with it : as soon as I start JACK (using the audiobox), the root process called "irq/40-xhci_hcd" starts using a lot of CPU..?

Copeau, How do you see what root process are running when you start jack?
Top

mwfoshee wrote:Copeau, How do you see what root process are running when you start jack?

I've been using my 1818VSL for a couple of years and it worked great, but recently (after a month break) I connected it and I got xruns and distorted sound all over the place.

I have did a ton of experiments, but still no success.
Here's what I did:
- Using two different laptops
- Using KXStudio 14.04 (which was working fine) and Kubuntu 16.04 with KX reps.
- Using (all) different USB ports
- Changing sample rate / buffer and period settings.

Does anybody know if there is a change made in the low-latency kernel or other significant file, which could be of influence?