not many changes to the synthesis or sound itself.. so, still, the only working gui elements are:
* osc1 (squ, tri, sin, width)
* flt1 (bw = inverse resonance)
* env1 is hardcoded to osc1 volume
* env2 to filter frequency (always active)
* master vol
torhelgeskei.com / music
Top

Would be great to replicate Ichira Toda's Synth1 feature set 99.9%
and then even more. 16 parts like yoshimi and zyn?

Looks like a great start for whatever you have planned!
Cheers
Top

tired..
need to sleep..
will write some more about it tomorrow..

it's still "work in progress", so there's not much safeguarding or hand-holding yet.. so, put a limiter or something after it to protect your ears and equipment.. just in case..

no effort at all has been put into efficiency or visuals yet !!

Hi, thanks for this.
I'll give it a try soon.
Do you need help with anything? Visuals? Test? Presets?
Audio mastering for open minds: https://openmastering.studio
I master music using only free/libre softwares and DIY hardware.
Contact me for a free mastering sample.
Top

well, first of all, thanks for offering your help! much appreciated!

at the moment, this is kind of a mix of two things: a simple/early prototype so that i can test various algorithms and features and stuff, and an example plugin for my plugin framework so i can test it in the 'real world'.. but it can generate lots of interesting sounds already..

the framework itself, plugin format wrappers, and the gui system is starting to get into a good shape, and have the features i want, but the audio code has not gotten as much attention yet..

it's quite ineffective (cpu-wise) as it is now, and it will take some time to make it perform (and look) good enough.. i have started to look at optimizations, initially the simplest, most obvious "low hanging fruit", but there's still a long way to go, and some decisions have to be made..

there's quite a few things i need to change, some features will be removed, and other added.. so it's a bit too early for presets, etc..

but i am happy for any kind of help and input, of course, be it comments, suggestions, testing, or whatever..

yeah, visuals could be a lot better.. at the moment i draw everything using vectors because i'm thinking about resizeable gui, but there's of course support for bitmaps and stuff too.. knobs, etc.. things will slowly improve, i hope

EDIT: just did an extensive restructuring, which will lead to a major performance increase! the entire modulation matrix were processed for every (playing) voice, for every incoming (midi) event, which was absolutely not necessary!
torhelgeskei.com / music
Top

I donwloaded the synth, installed in my vst diectories (~/.vst, ~/.vst3), but it seems not being recognized by Carla or Ardour on my system.
I have debian sid with kxstudio repositories.
Top 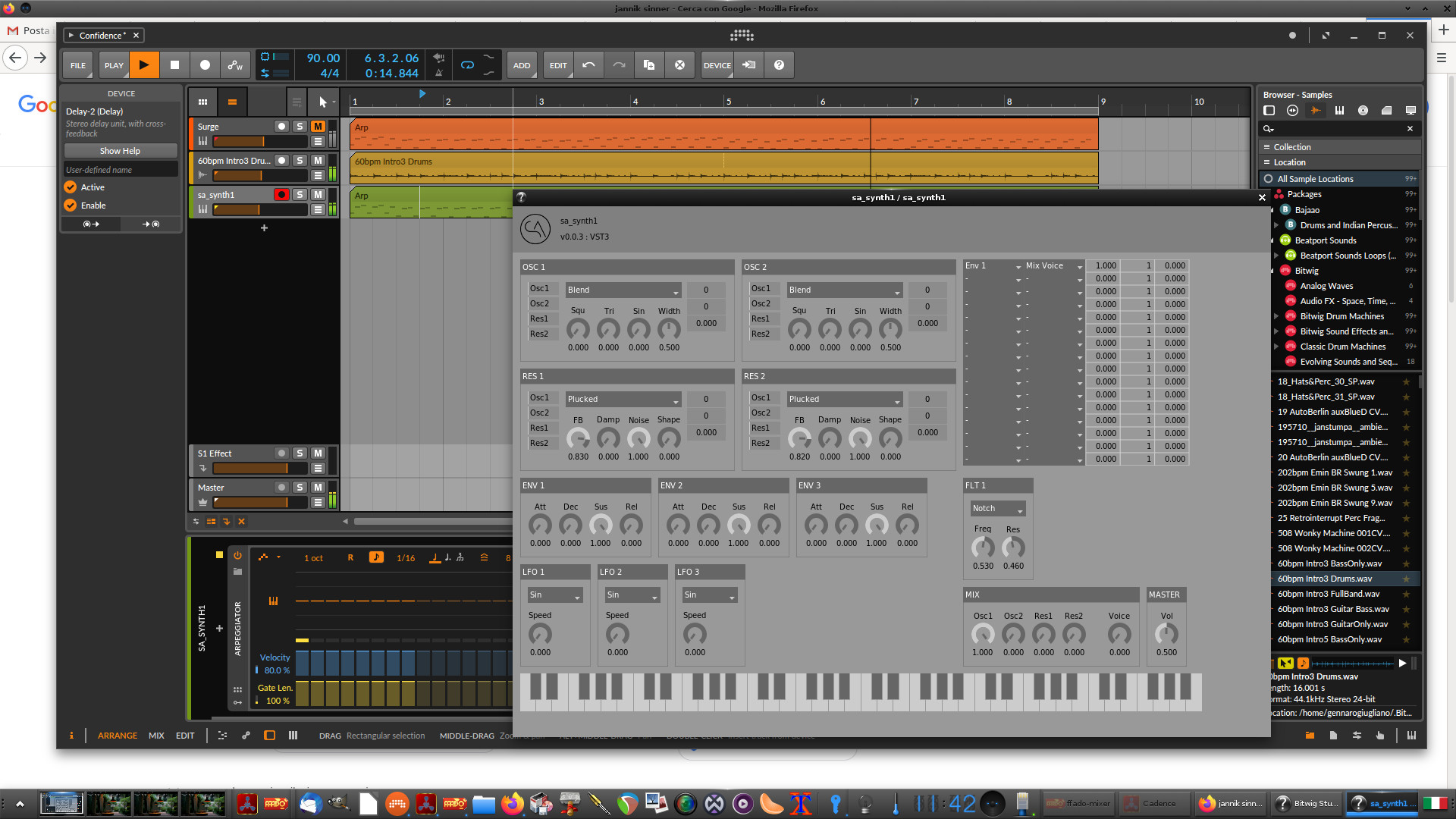 Hi skey,many thanks for your new synth for gnu linux

It's a grea projekt. I testing ultimate version on Bitwig Studio 3.2.8 and work perfect.

it's been a while since i worked on this.. it currently uses quite a bit of cpu, because of how the individual voices and modulation (matrix) are being calculated.. this is mainly a concern in synths, but not so much with effects.. but anyway, i started experimenting with some optimization things (cache, alignment, simd, etc), which looks very promising.. but then got side-tracked by music making (a 7" single, and an album coming later this year).. i'll be back soon, and continue where i left off..
in the meanwhile, keep the reports, requests, comments, suggestions, coming..
torhelgeskei.com / music
Top

In Debian SID there is only libxcb-util0 (libxcb-util.so.0), so no libxcb-util1.
It looks similar to an issue related to: https://github.com/surge-synthesizer/surge/issues/931

Then I tried to create a symlink libxcb-util.so.1 to libxcb-util.so.0 and the LXVST2 version somehow works. I can play the synth and interact with the GUI.