by skei
some audio damage stuff seems to be coming to linux: 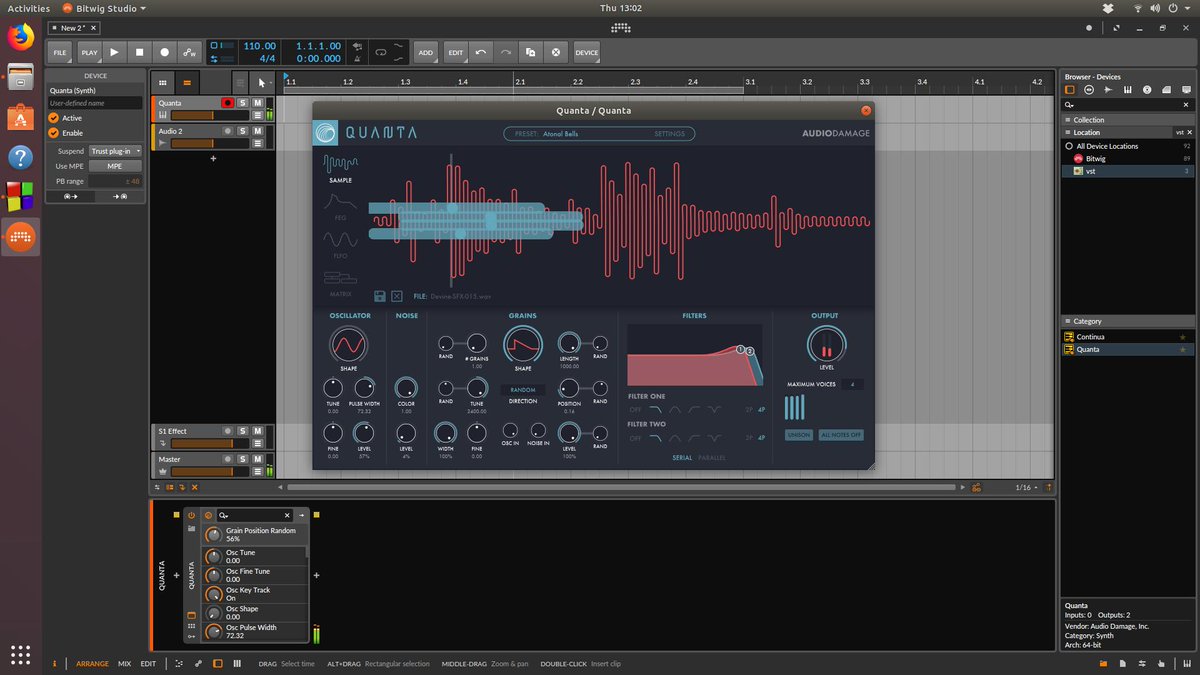 by sysrqer
Oh wow, that would be amazing.

by WforWoollyMammoth
His next post on Twitter has him asking for testers for the LinuxVST. When I saw that screenshot I thought it might have just as well been just about him testing the plugin with LinVST, but it does indeed seem to be the case that he's seriously considering releasing stuff on Linux.

I can't be the only one lusting for Linux versions of their reverbs, in particular. There's been so much talk about people wanting better algo reverbs for Linux and I've kept seeing EOS appearing on people's "favourite reverb" threads for years.

by skei
seems to be more coming!

by ufug
Oooooh, I would not hesitate to grab Enso.

by skei
yeah!
just after posting the above, i also saw this:
https://www.patreon.com/posts/is-linux-ready-31194176
nice!

by Crandall1
Hey, just found this board.

To help with the speculation, yes, we’ll be bringing our whole product line to Linux. Next in the chute will be Eos 2, as many people have told me (as was mentioned above) a good algo verb is very desirable for Linux.

As I mentioned in my Patreon post, I don’t know what I don’t know here; I am not very Linux-savvy, aside from having done some Creative Coding projects on the R-Pi, which hardly counts in this context. As far as I was able to test, everything seems fine with Dubstation. I wanted to get that out there so I could start getting bug reports to see if we did anything wrong. So I’m going to let it simmer for a couple weeks, then update Eos 2 to include this Ubuntu build.

So, if you run in to any problems, or have any suggestions as to how to better approach it, do not hesitate to get in touch with me (preferably via the Audio Damage contact, info at audiodamage dot com, so it is in our system; I very rarely read forums at all.)

I feel it bears mentioning that there has been a lot of discussion about doing this sort of thing lately in our plugin developer Discord (which contains the vast majority of indie plugin devs). Audio Damage just happened to be in a position to jump in feet first, but I would expect to see some other companies testing the waters. It wouldn’t hurt to write some of the JUCE-based indies that you’re interested in and ask; I know that, for certain devs like Unfiltered Audio and Creative Intent, it would be as easy to do as it was for us, and they might just need a little push.

Have to mention, that some devs have been building they JUCE-plugins for Linux since beginning, Loomer for example. And from my point of little experience - it is not hard to build JUCE apps under Linux.
One of thing which may run into issues - is using -march=native flag. It causes Illegal instruction on different CPU: https://www.kvraudio.com/forum/viewtopi ... 0#p7519320 Don't know is it relevant to Windows or Macos.

Crandall1 wrote:there has been a lot of discussion about doing this sort of thing lately in our plugin developer Discord

where can i find this?
not too familiar with discord and servers/channels (or whatever they're called)

skei wrote: where can i find this?
not too familiar with discord and servers/channels (or whatever they're called)

It is not public, sorry. Professional plugin devs only. It’s where we get to grumble.

by stanlea
So what's the way to try the builds ? Will you provide demos, and in what order ?

by Crandall1
There is a demo of Dubstation up now on the Audio Damage site. Note that the retail one and the demo are identical except for the timeout. Eos 2 will be added in the next couple days. I did a build of it last night that works fine for me, but one of the testers reported a UI problem so I need to track that down.

In general, we’ll add as we update. Since putting up a new zip file triggers an email to all customers that have purchased it, and our habit is to only do that if there’s a reason to, it would be irritating to the existing customers if they kept getting update emails only to find there was a build for a system they don’t use added once they downloaded it. I try not to make a habit of irritating existing customers (despite evidence to the contrary) so we’ll be rolling these out in a somewhat tender fashion. I also want to wait for the release of Dubstation to prove that it was problem-free.

However, what I will be doing shortly is putting up Linux versions of our free plugins, Rough Rider and FuzzPlus. As soon as I get a spare minute I’ll bust those out.

by stanlea
Thanks. I tried Dubstation demo on some loops, using Lupp and Carla patchbay. No problems so far, and keeps light on CPU. Cool.

Crandall1 wrote:There is a demo of Dubstation up now on the Audio Damage site.

i just downloaded and tested it.. works perfectly in mint 19.1!
awesome!!

resizing the gui seems to be buggy in reaper (linux version)..
(works in bitwig)

i'll test it more thoroughly a little later today..
should we report problems/bugs here, or somewhere else?

Crandall1 wrote: However, what I will be doing shortly is putting up Linux versions of our free plugins, Rough Rider and FuzzPlus. As soon as I get a spare minute I’ll bust those out.

Have you considered getting a company forum at KVR? Works for U-he and Bitwig.
Might increase your industry exposure, and consolidate internet communications.
U-he made a separate linux section, to keep discussions sorted. Bitwig linux threads
are not isolated, and don't seem controversial. Looking forward to trying your products!

Several other linux and cross-platform devs have kvr forums. If a business
has communicators and customers, as yours seems to have,
it can be a good ride.

Tried the FuzzPlus III, very enjoyable, lost of range. A commercial version
with a randomizer would be a nice addition. The old but good CMFuzz has one,
and gets lot's of use in wine. A 64 bit randomizing/preset-saving FuzzPlus III
would be very cool, and it's almost stocking-stuffer time.
Cheers
All times are UTC
Page 1 of 3