What other apps and distros do you use to round out your studio?

This thread is for further testing and discussion about PW on Debian Sid.

Spurred on by this thread ^, Debian wiki saying PW is more advanced in Testing/Unstable, and unfa's video, I installed a fresh siduction (which is Debian Unstable or Sid basically). Followed the wiki using only packages in the repo and it works!
Just basic testing with a 13 track Mixbus 32C session, no plugins, played back for some time with no xruns at 256/2 48kHz. Even played a FLAC file in MPV at the same time with no xruns! Actually I'm playing a loop in MB and one just happened when the loop restarted.
Will test recording a MIDI keyboard tomorrow and a few other things like how low buffer will go. Past my bedtime now.

I was hesitant to try PW in Bullseye as it is unsupported but it seems like it's getting useable in Sid. siduction has PREEMPT kernel by default but I didn't do any optimising. I'll start a new thread for any more reports as it's not about AVL-MXE any more.

Welcome back to the "unstable".

Haha, yeah thanks. I finally dragged myself away from using Unstable after 14 years using sidux/aptosid/siduction back in February when I set up Bullseye to work nicely with PulseAudio > JACK > ALSA and now back in eternal upgrades land. I'll likely rebuild starting with a Sid netinstall soon as siduction has more things than I need although was the fastest way to get up and running for testing.

In other good news, I held back from testing PW earlier as I use LSP Parametric EQ for room correction and was unsure if it would work with PW. Happy to report it works just as nicely as in the old system.

Cool! I've also been using sidux/aptosid/siduction for a long time. (About 15 years, I think...) My main system is still rolling aptosid with the excellent slh kernel. It was probably installed about 10 years ago, and it still running great. (It survived some hardware changes too.) My laptop (and my wife's) run siduction.

I guess I need to try PW soon. Thanks for testing it and letting us know!
Top

I decided to start again from a Debian Testing netinstall upgraded to Sid as even the lightest NoX siduction is much more loaded up, 400MB vs 1GB. Haven't set up audio on it yet.

One thing I am concerned about, when using PA-JACK sink all PA applications automatically route through the room correction EQ. I'm wondering how to make the EQ default sink for all applications in PW or even if I can?
Top

Got the new Sid install working OK for simple playback with PW. Unfortunately when just playing music with DeadBeef, it disconnects from the LSP PEQ when playback is stopped and reconnects directly to system out when play is restarted bypassing the EQ. There's probably a simple way around it but early days.
Top

Maybe you can use a session manager to save your connections?
Top

I just spend some time trawling through PW wiki and issues at Gitlab. There may be a way to set up the EQ as a default sink similar to how pulseaudio-module-jack works in my current Bullseye system.
https://gitlab.freedesktop.org/pipewire ... nd-effects
I will attempt to set it up soon. Stay tuned.

Think I've got it, mostly.
PipeWire starts at boot from a systemd service, so that's easy. To get the LSP EQ room correction working I had to launch it and create a sink:

Then made connections in Qjackctl graph and save as a new patch in Patchbay.
For Mixbus I had to set the sink as output but that's only once per session and saved in Mixbus. *Correction - Mixbus can output direct to PEQ input.
One unusual thing that threw me for a bit is the sink sets up as a Playback section in which to connect applications and a separate Monitor section which is the output. Works though which is the bottom line.
I'm still not sure whether to switch to this setup for regular production or stick to my Bullseye PulseAudio > JACK > ALSA setup which has been working very well. There's a lot of customisation in Bullseye I would have to replicate. Time will tell but this appears totally workable now. 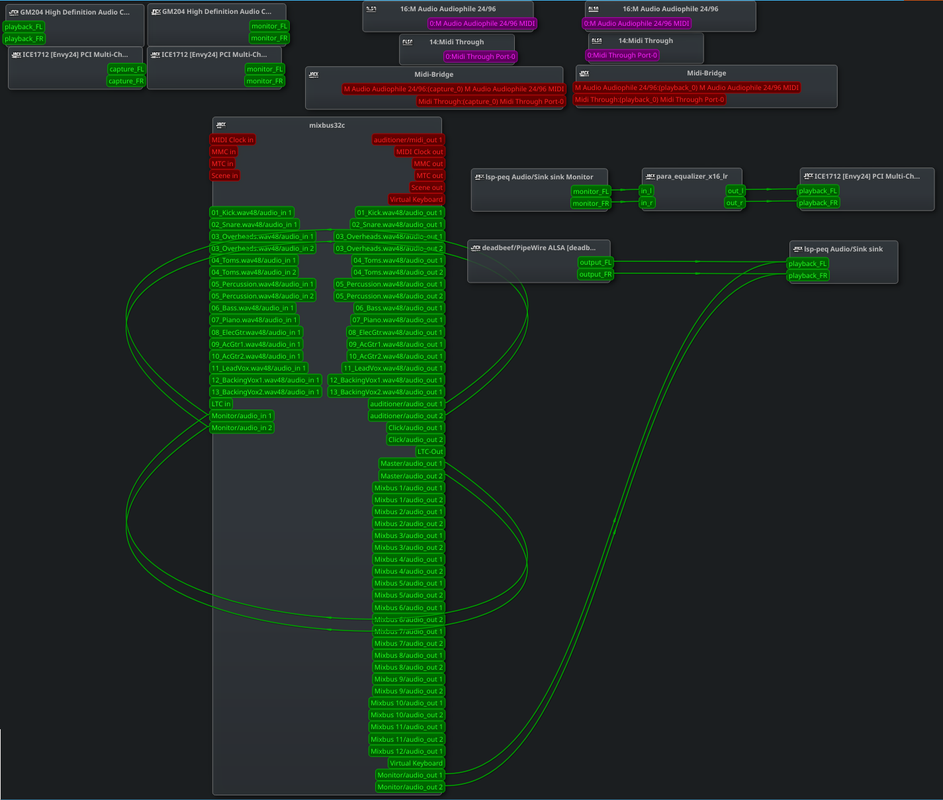 I've done a little more testing but I ran into occasional glitches the worst being white noise on starting play in DeadBeef which would subsequently play fine by just stopping and starting again. Possibly due to using the custom sink as for some reason the player would disconnect from it each time play was stopped and reconnect upon starting play. In my non-PW system with a PulseAudio > JACK sink the connection would remain when stopped and it works well.
I tried the keyboard with Sfizz in Carla playing Mats Helgesson Maestro Concert Grand Piano (nice piano SFZ btw) and the MIDI connection came up seamlessly. Mixbus worked well in a quick test.
But with minor glitches, having to install a bunch of non-repo plugins, and considering how well my Bullseye setup is working, I will just keep it installed as an experimental test bed for now.
I'm sure it will become feature complete and low on bugs in the near future, and have more documentation and other resources available to enable smooth setup. Also it may be usable for many cases already as in unfa's video. It may be mainly my quest to build room correction EQ into the chain which is not so straightforward although it mostly worked.
Top
Post Reply
10 posts • Page 1 of 1

Return to “Linux Distributions & Other Software”