Announcements of proprietary software may fit better in the Marketplace.

Thanks for the info. By the way: Have you filed a bug report?

Yes, I will be using a USB soundcard (Focusrite Scarlett 2i4 [1st gen.]) with it.

I think, I'll just give it a try and hope that it works alright with my setup.
Top

Just curious, when you plug in the Focusrite, how does it show up in Carla or Patchage?

The X32 just shows up as 32 sources/sinks when I plug it in.
Top

Well, that's great, but they ARE called Ubuntu Studio Controls...

avlmac wrote:Just curious, when you plug in the Focusrite, how does it show up in Carla or Patchage?

The X32 just shows up as 32 sources/sinks when I plug it in.

Okay, so I installed Ubuntu Studio 18.04 and added the PPA.
After the Update it looked quite 19.04-ish but there is no Carla!
Did you get Carla installed after upgrading via the ppa?

I can confirm the bug that Ubuntu Studio Controls always re-checks "Start Jack at session start" after I have unchecked the box.
Edit: Actually, no, it only does this when I click the start or restart Jack button; when I stop Jack, it unchecks the autostart box again. By the way: There has been a Ubuntu Studio Controls update seven hours ago in the backports PPA.

Also, after selecting "Jack Master" as the Default PulseAudio Output Device, I wouldn't get the notebooks own speakers back as PulseAudio output after reselecting the notebook's internal audio card again as PulseAudio default. It would still playback via Jack only (=Focusrite output).

There were also inconsistencies with Patchage. For example it would say buffer size 1024 (when in fact 256). I stopped and restarted Jack several times, then even deleted some configuration files for jack, Qjackctl and patchage. After that Pulseaudio playback via the Notebook speakers would work again and patchage showed the correct buffer size.

About how the Focusrite shows up in Patchage: I have no experience with Patchage or Carla at all. In the past I've used Cadence (as Qjackctl substitute) and that was it; never had to do Jack routing, everything was within one DAW (Harrison Mixbus) so that's all unknown territory to me. It looks to me though that the Focusrite is only there as a MIDI device, not audio. (Or is "system" the Focusrite?)

I'll attach a screenshot of patchage to this post so you can see:
You do not have the required permissions to view the files attached to this post.
Top

Yes, the ppa contains Carla, but you need to do 'sudo apt install carla'.

As for the graph you posted.

On my laptop, the PCH device is the onboard sound.

When plug in my X32 it adds this to the graph:
X32_graph.png

Is it possible the audio ports are off the Patchage display area? i.e. the scroll bars on the Patchage window?

Carla has a cool feature that shows what out of view. Here you can see my X32 sinks are off the viewed area:
Carla.png
You do not have the required permissions to view the files attached to this post.
Top

I think I have solved a problem I was having - when I disconnected my usb soundcard USC would restart jack causing carla to need to be killed and restarted. I had my usb soundcard selected under 'USB Device that should be Master' but if I deselect it then jack isn't restarted with the unplugging, the usb card ports simply disappear. This means that carla doesn't crash and I can just connect carla to the appropriate output as necessary.

Very happy with this, it's extremely convenient to have the hotplugging.
Top

Ah yes, I did notice both Carla and Patchage sometimes loose track of what's there, especially if things go away.
Top

It would be nice if it were a bit more seamless, when using that usb master option the system output ports remain the same which is handy because you don't have to manually connect the output all the time. The downside is that it restarts jack when the usb is unplugged.With that option disabled the usb soundcard appears as an extra card so you can route things to both if you want.

If it could just switch master without restarting jack and keep the system output port the same it would be perfect, true hotplugging without having to manually connect things each time.
Top

avlmac wrote:As for the graph you posted.
[...]
Is it possible the audio ports are off the Patchage display area? i.e. the scroll bars on the Patchage window?

Good idea. But no.
Then I installed Carla and it's the same there as well.
(See screenshot attached to this post)

Could it be that "system" is in fact the Focusrite? Since it's the Scarlett 2i4 it would seem to make sense to me with 2 captures and 4 playbacks showing for "system". (As I said before this whole patchage/carla thing is unknown territory to me, so I don't know if this makes any sense.) If not: Then what is "system"?
You do not have the required permissions to view the files attached to this post.
Top

From tinkering around I think System is whatever you have set as the master. Can you screenshot your USC settings?
Top

Here it is:
You do not have the required permissions to view the files attached to this post.
Top

In your case yes, the system is your focusrite. When the usb is plugged in and you have 'USB device that should be master' set as your device the 'system' port is the usb card, the PCH in your screenshot is another card, internal I guess?

These are the settings I'm using, without my focusrite selected in that setting it creates a second output rather than making it the system output like your settings do. 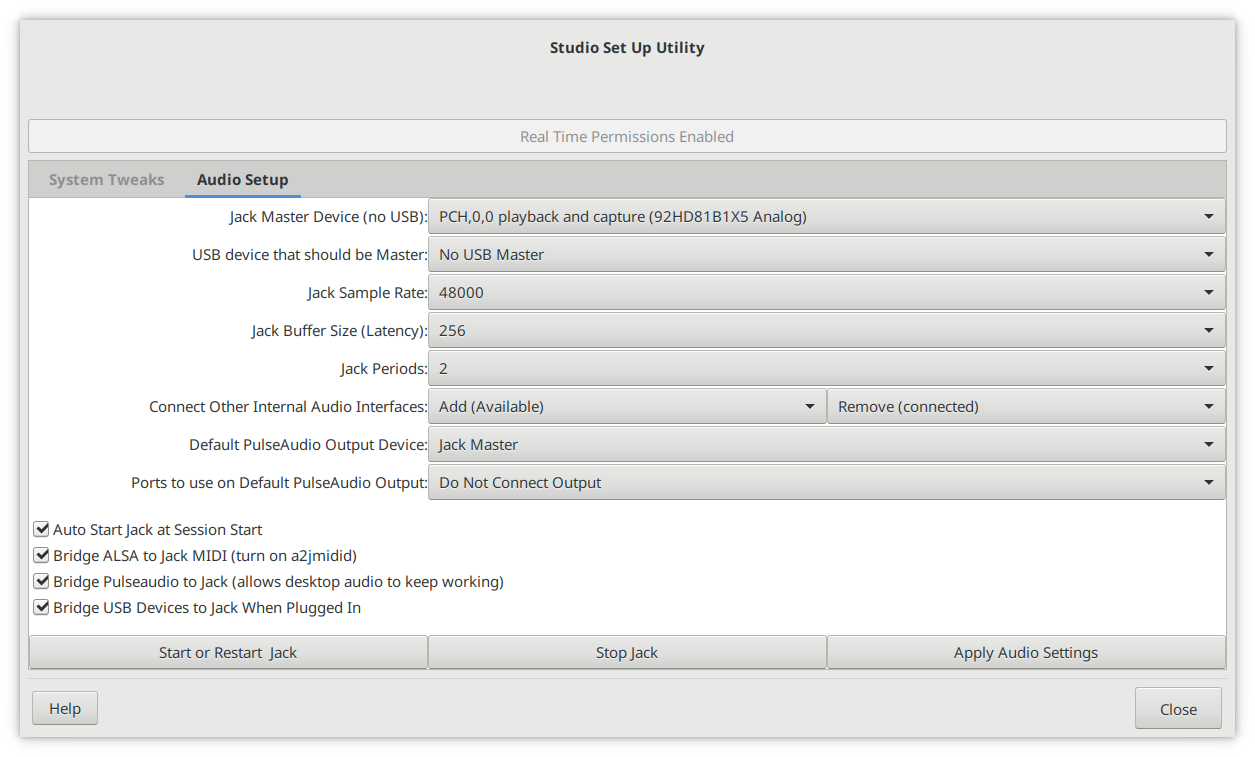 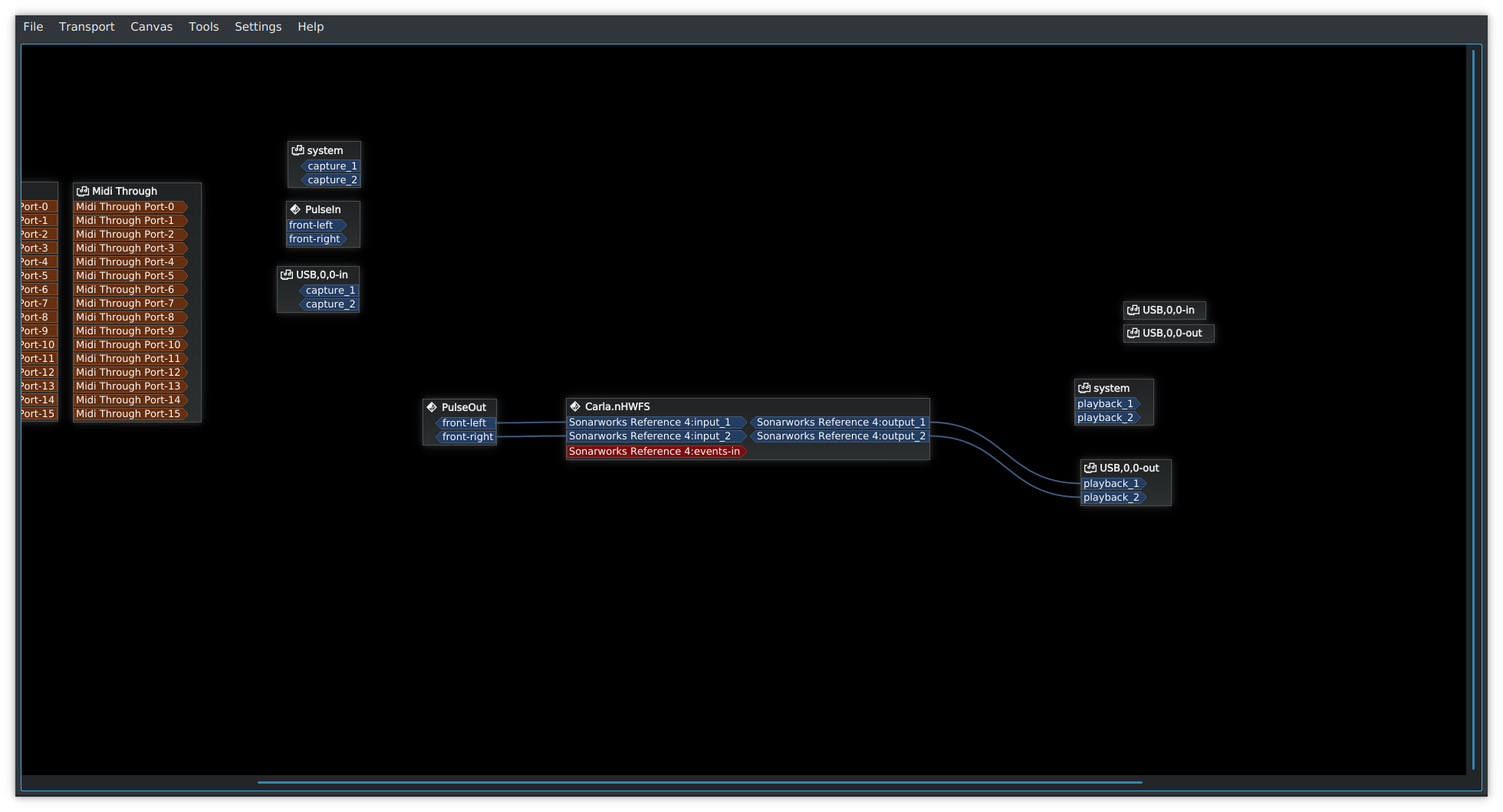 sysrqer wrote: the PCH in your screenshot is another card, internal I guess?

Yes, that is the notebook‘s internal soundcard.

Thanks for showing me your setup. I must say that the entire Jack thing has always been hard for me to understand.
Top

sysrqer wrote: the PCH in your screenshot is another card, internal I guess?

Yes, that is the notebook‘s internal soundcard.

Thanks for showing me your setup. I must say that the entire Jack thing has always been hard for me to understand.

The settings for this are a bit unusual and quite confusing so it's not just you, play around until you get what you need. It's a shame that the documentation on this program is quite sparse. I would have expected that my usb soundcard would need to be selected for it to work but with my set up it actually works best not selected anywhere.
Top
Post Reply
34 posts

Users browsing this forum: No registered users and 1 guest