Discuss your workplace, instruments, amps, and any other gear.

This is my main list of audio software at this moment:

DAW/scoring:
- Reaper + stock/JS plugins (easily satisfies all my needs)
- Renoise (I have fun tracking, but not my first choice now. One of the bests samplers I know. Great tool for sample based sound design and stem based compositions sketches)
- Musescore (I use to arrange music; learn and practice music theory)

Synths:
- Surge/Surge XT (almost all I need to make instruments. I love macros to make subsynths inside this beast)
- Yoshimi (a gem for pads and keys)


Special mention to software I've been making use of in the past, or I use punctually now:

Part of my setup is a Nux 'Mighty Plug' MP-2, a $75 miniaturized amp/effects studio that plugs into your guitar's cable jack, and has headphone and usb ports. The extensive editing possibilities are done wireless with an app on your phone or tablet. The factory app is augmented by an open-source competitor by 'Tuntori', with more and better features. It's found welcome homes in my Alesis QS8 synth's headphone jack, the audio output of my IK Uno synth, and input of my old ART effects rack, and also via usb connection in AVLinux, to whatever software is looking to be amped up a bit. There are seven sound slots to be cycled through by the one big button on the face of the unit, lit up a different color for each one. So handy as a preamp-pedal replacement, whether using the phone app or not.

Here's one of many reviews:

The song title and cover art may be clues to song's theme. Also at Spotify. Hope you find a keeper! Artist name on good days, is: Franklin Cheney
Top

It's a never-ending journey, a trail to be tracked by the scattered remains of previous iterations of the setup littering the side of the road behind me.

Name: Still Bruce, tho if I buy any more gear it'll be "Mud" (at least with the wife!

Computer: home built PC - 4GHz FX8350
I upped the RAM to 24GB and finallyFinallyFINALLY replaced that ancient GT730 with a GTX960 I got for a (comparative) song on Facebook Marketplace. The M-Audio Fast Track Ultra 8R is working quite well. The little Chinese brick amp and the NHT SuperZeros are still doing yeoman service, and besides, I still don't have room for anything bigger.

Keyboards:
This is where things REALLY got shook up! Some judicious bargain hunting landed an Arturia Keylab49 (OG, not the MkII) with keybed issues. Arturia tech support came thru and found me a new keybed, so no problems there. Now I just have to up my debugging chops and get the MIDI Control Center working under Wine if I can.
The other BIG bargain score was the $50 (yeah, I didn't think I read that right first either!) Alesis QS8.1 I found on CraigsList. I contacted the seller to see if she'd mistyped, but it was for real. Keyboard wasn't working, and someone had abandoned a decent keyboard in the apartment she'd just moved into. Turned out to be an easy repair, tho I do still have the dreaded task of pulling the keybed apart and cleaning all the contact patches.
Last cheap online acquisitions were a pair of Alesis SR-16 drum machines (first one was mostly dead, but I should be able to fix it).

Guitars:
There's a sea of six strings behind me, headed up by the "daily driver", a heavily modified Ibanez ART-420 with a pickup transplant (Dimarzio SuperII, Duncan JB, Roland GK-3). I've finally landed a second GK-3, so one of my backup guitars (probably the black Tele that's wired like the Ibanez) and play in the GR space as well. Speaking of GR space, I picked up a GR-50 to put in the rack, and an SY-1000 to use in the guitar rig at church. Still haven't done any remedial work on the cheap P-bass. That's way low on the totem pole at present.

Software used:
I'm on Xubuntu 22.04 with the Studio stuff provided via ubuntustudio-installer. I tried and greatly disliked KDE; I decided to stick with XFCE. In the never-ending pursuit of fewer xruns I also went with the Liquorix kernel. Thanks to the magic of Yabridge and WINE, I'm rocking a slew of plugins, the favorites these days DCO-106, Eight Voice, OdinII, Surge-XT, ExactLite, DecentSampler, and Spitfire LABS. Oh yeah, and of course Aeolus because pipe organ. Haven't done much with VCVrack lately. Too much other cool stuff to play with.

Current projects: I had to rebuild the desk a couple times to make room for (and shore up the structure to support) the godawful heavy Alesis. Durn thing weighs sixty POUNDS; I hurt my back hauling it out of the seller's car when I bought it! Had to widen and lower the desktop. Also just threw together a couple of stands to hold the Keylab far enough up that I can still reach all the buttons on the QS8.1. Next up will be remounting the monitors and speakers so they're centered on the new, wider desktop.

The new, improved, desk, with the sunken and widened center section to accommodate that Alesis monstrosity 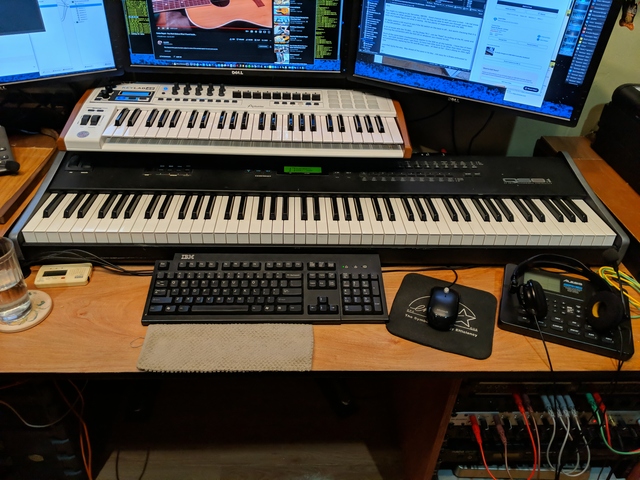 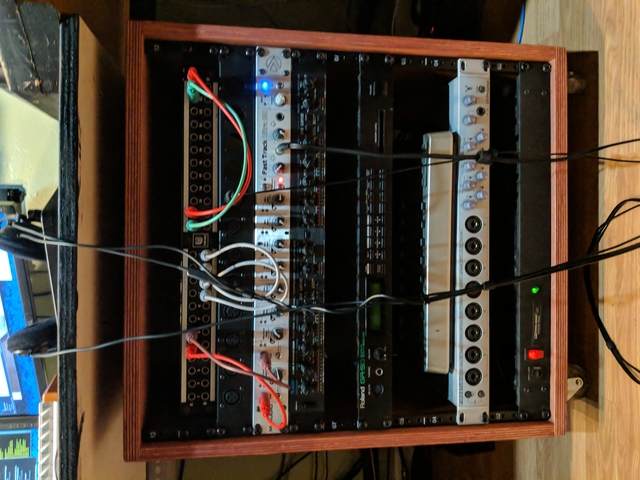 The quick and dirty supports I gen-ed up for the Keylab. Eventually I'll make a third and put a proper shelf up for some future expansion space

)
Issues with the system (problems, complaints): HISE package in the AUR Arch linux user repository would be great.
Overall rating: Everything is great - maybe a huge table with all 4000 native linux plugins would be great - a place where I could look up dependencies, configs and known issues
Listen to my music
https://l330.bandcamp.com/
Top
Post Reply
109 posts

Return to “Your Studio & Gear”